Muscular movements are controlled by the central nervous system. Right now my brain is actively planning the muscular contractions that will make my fingers exert a force on different buttons on my keyboard, ultimately resulting in the text that you are hopefully enjoying right now. How does this work? Well, there are many unsolved mysteries, but we have also learned quite a lot. 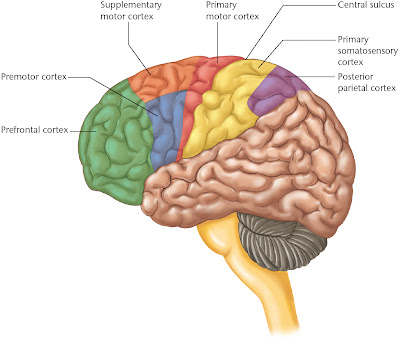 Two areas of the brain, the "supplementary motor area" (SMA) and the "premotor area" (PMA), seems to be involved in planning the exact series of muscle contractions that are required in order to do something such as writing this text. How do we know this? Put a person in an fMRI machine and ask them to imagine doing something, and wallah, SMA and PMA lights up (meaning that more blood is going to these areas, mening that more glucose gets there, meaning more activity in those cells)! In order to actually move you will also have to get your motor cortex involved. It is from this area that axons travel down into the spinal cord and elicits movements. If you stimulate the motor cortex electrically during a surgery (this is sometimes done to see how the body is mapped onto the motor cortex), then the corresponding muscles will contract, perhaps resulting in an arm or a leg flapping out. So when your SMA and PMA have planned the contractions they will communicate with the motor cortex which then sends signals down to the alpha motor neurons in your spinal cord which in turn will release acetylcholine onto the muscles causing them to contract. All this happens within a few milliseconds! (Of course other areas such as the basal ganglia and my own darling, the cerebellum are also involved in movements, this was merely a simplified account.)

Who cares?, where are the applications? Back in 1982 a guy named Georgopoulos measured the activity in the motor cortex of a monkey while it was performing some well defined motor tasks. Georgopoulos found that a certain movement would be associated with a particular pattern of activation in the motor cortex. Thus, merely by looking at the activation in the motor cortex he could predict that the monkey was trying to move say, its left index finger. This could be very useful for people suffering from paralysis. Theoretically it should be possible to measure motor cortex activity and from that see what movements the motor cortex is trying to do. Then, to help a paralysed patient what you need to do is to connect a robotic arm programmed to move in response to neuronal activity. This procedure is no longer science fiction, it is reality. In this article it is described how some surgeons used signals coming from the motor cortex to make a prosthetic arm move, in other words they made a true cyborg out of lucky Mitchell, 24.

Although I am pessimistic about the prospect of creating a brain that is as complex as our own I do think that in the future more and more applications like this one will appear.

Posted by rasmussenanders at 4:54 PM

Thanks for this interesting entry.

One can always test any newmade intelligence (including one's own brain ;) ) like this:

Thank you,
I have actually just listened to an entire lecture about the main challenge for the turing test as a measure of intelligence.

You have perhaps heard of "the chinese room", a thought experiment made by John Searle. It goes something like this: Imagine that you sit in a room and that you get chinese symbols through a mailbox. You also have a complete table showing how to manipulate these symbols and when this is done you send it back through the mailbox. To the outsider it would seem that you new chinese, however, I have been convinced that even if I could do this (manipulate the symbols according to the rules I have) I do not know chinese since I do not know what any of the symbols mean.

To put it in another way, understanding (whether that is the same as intelligence or not), requires semantics (the meaning of symbols) as well as syntactics (how you manipulate the words), a computer only knows the latter, why it does not understand anything.

....i, mean, this "guy" doesn't have the means to move about like many people do. "He" would have to totally make up many experiences.

I can't quite follow the Chinese room problem, i mean, artificial intelligence is so much more than just "mastering a language". One would have to manipulate lots and lots and lots of skills, not just the ability to speak a language. The full range of human behavior (or, at least, human communication) is at stake here. ;)

well, what the hey.... i guess i'll have to read more about Searle, before i make any more statements.

adding again...
I meant: The Turing test seems to cover much more than speaking a language.

Indeed, you could apply the turing test to any type of behavior. The chinese room argument is superficially only about language, however, I thik that the problem is the same for all domains of behavior.

The argument is really quite simple (I probably screwed up when explaining it). I'll try one more time because it is a nice argument. Imagine that someone in asked you in chinese "what is the longest river in china", it would probably look more like "/&%/&%¤"/&R¤/&%#¤". You have a paper where it says, if you get "/&%/&%¤"/&R¤/&%#¤" (same as above), then reply (/&#(/&¤%#%%%%%%#¤(/#, which in chinese mean the yellow river (or whatever is the longest river in China). Further, imagine that you had a response to any type of input that you would get. If you had this you would pass the Turing test and someone from the outside would conclude that you know Chinese, but do you? No, you just know how to look up how to respond in a list, you don't understand it. Why not? Because you don't know what any of the symbols mean, in English you know what the different symbols mean... I hope it got clearer now, but if not, check it out somewhere on the net, it quite a simple argument really.

One of my joys in life is parrots, unfortunately i don't have any now. They don't actually "speak" my language, they just understand what input (which sound and sentence) to make,

......in order to get the output (sugar,peanuts, rewards)

(I've also read the criticism against the Chinese argument)